Sathuranga Vettai 2 features Trisha as the female lead and has story and screenplay penned by H Vinoth, who is now of the most sought after and leading filmmakers in Tamil cinema. H Vinoth made his directorial debut with Sathuranga Vettai and there has been no look back since then. It is going to be interesting to see what the makers have in store with this sequel. NV Nirmal Kumar of Salim fame has directed this venture. Produced by Manobala under the banner of Manobala's Picture House, the film has cinematography handled by KG Venkatesh, while Asvamithra has composed the score. SP Raja Sethupathi has edited the film.

Sathuranga Vettai 2 will have the elements of a con film but will be a fresh story. Arvind Swami was last seen in Vijay's Thalaivi in which his performance as MGR received highly positive reviews from the audiences. He has films like Naragasooran, Kallapart, Vanangamudi and Rendagam which are fully complete and ready for release. On the other hand, Trisha will next be seen in Mani Ratnam's Ponniyin Selvan in which she will be essaying the female lead character, as Kundhavai. All eyes are on her presence in the film and industry reports are that the talented actress has delivered a classy performance. 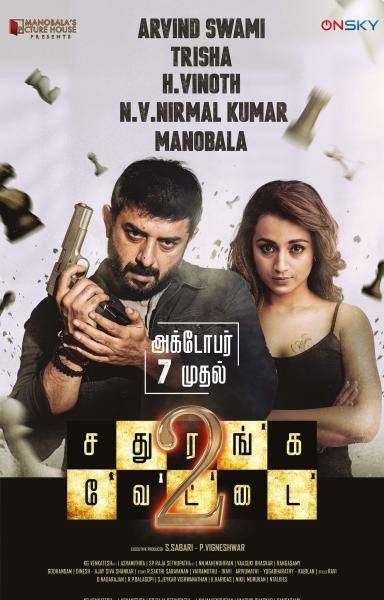 BREAKING: Trisha's next after 96 is the remake of this superhit Hindi film

Huge Announcement On Trisha's Next Films After Petta

Here is the super mass action-packed teaser of Vishnu Vishal's next, Gatta Kusthi!