RIP: Popular actress Madhavi Gogate dies at 58 due to COVID-19 - film and TV industry in mourning!

Popular Marathi-Hindi television actress Madhavi Gogate, best known for starring in the Star Plus show Anupamaa, passed away on Sunday due to COVID-19 in Mumbai. She was 58. Gogatewas admitted to the Seven Hills Hospital in the city after she contracted the coronavirus. She rose to the spotlight after starring in the Marathi film Ghanchakkar opposite Ashok Saraf, including making her debut in television in the Marathi show Tuza Maza Jamtay. Gongate has also made appearances in several Hindi television serials like Aisa Kabhi Socha Na Tha, Kahin Toh Hoga, Koi Apna Sa, etc.

The news of Madhavi Gogate's demise has come as a big shock to many in the television industry, with condolences pouring in from celebrities and fans alike. Actress Rupali Ganguly, who played the character of Madhavi's daughter in Anupamaa, expressed her condolences on her Instagram Story and wrote, "So much left unsaid. Sadgati Madhaviji", while also sharing a few photos of their time together on the show. TV actor Nilu Kohli also paid his respects and wrote, "Madhavi Gogate my dear friend nooooo. I can’t get down to believing that you have left us. Heartbroken @gogatemadhavi you were too young to go. Damn Covid. I wish I had picked up that damn phone and spoken to you when you did not reply to my msg. All I can do is regret now." 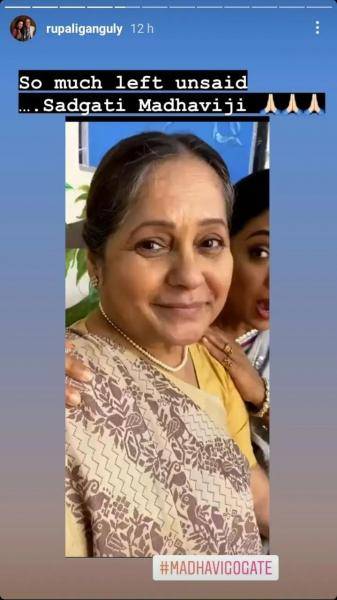 Actor Alpana Buch, who appeared on Anupamaa as the mother-in-law of Rupali Ganguly's character, shared a picture of Madhavi Gogate on Instagram and wrote, "Madhaviji this is not done..actor can not take exit before scene gets over...we will miss you on Anupamaa set...your cute smile.. sweet voice...and humor...we will all miss you." Cast as Gogate's son Bhavesh Joshi on Anupamaa, Mehul Nisar mourned her death and wrote, "Shocked..! Numb..! Unbelievable..! Madhaviji has left us..! RIP#madhavigogate #anupamaa."

Tamil Nadu: You won't be allowed inside cinema theatres if you are not vaccinated - Breaking Decision!