The official announcement pertaining to Anjali’s new film featuring Yogi Babu and Vijay TV fame Ramar alongside in titular roles, which is a fantasy-comedy, was made a few days ago. This morning, the film was launched with a simple ritual ceremony followed by the commencement of shooting, which is being planned to be completed in a short span of time. 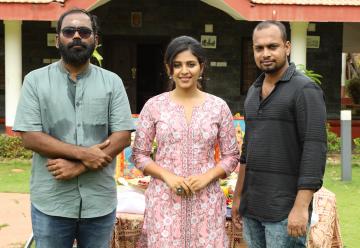 Sharing the news, producer K Sinish of The Soldiers Factory says, “I am happy that the film is launched with a ritual ceremony with the presence of well-wishers and friends. Director Krishnan Jayaraj has crafted a story that has a lot of rib-tickling and engaging moments. As a filmmaker and audience, I am really bounded to more excitements working on this project. I am happy that Anjali has accepted to be a part of this film and I can assure that she will have a complete changeover in her screen presence with a different role in this movie. Yogi Babu and Vijay TV fame Ramar aren’t simply included for the sake of public glare but will appear in substantial roles, where their appearances can be found throughout the movie. We will be soon making announcements on a few more prominent actors, who will be playing important roles in this movie.”

Vishal Chandrashekar is composing music for this untitled film, which has cinematography handled by Arvi and Sakthi Venkatraj is the art director. Ruben takes care of editing with Arunraja Kamaraj penning lyrics and Dhilip Subbarayan choreographing action sequences.