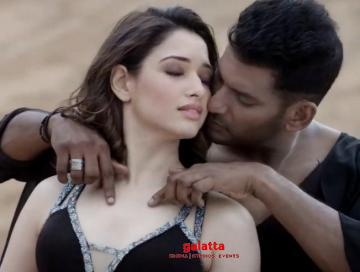 Amidst good expectations from the fans, Vishal's Action hit the screens yesterday (November 15) in wide number of screens. As the title suggests, this new film is a high octane action adventure featuring Tamannaah and Aishwarya Lekshmi as the female leads. Directed by Sundar C, this film is mostly shot in abroad locations on a grand scale. Produced by Ravindran of Trident Arts, this film has music by Hiphop Tamizha and cinematography by Dudley.

Action marks the third time association of Vishal and Sundar C after Aambala and the unreleased Madha Gaja Raja. The makers of Action have now released the video of the romantic number 'Nee Sirichalum'. The visuals of this song features Vishal and Tamannaah. This song is crooned by Sadhana Sargam, Jonita Gandhi and Srinisha, with lyrics penned by Pa Vijay. This song is sure to attract the masses and the youngsters.

The visuals of this song look stylish and glossy and you can get to see more of this in the film which is running at the theatres. The video song has been released on the official YouTube channel of Muzik 24*7 who owns the film's audio rights. Catch the video song of 'Nee Sirichalum' from Action here: