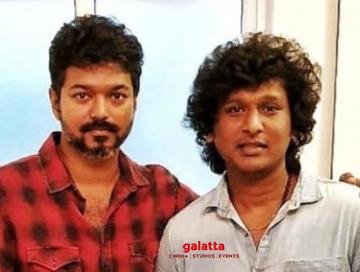 Actor Vijay’s upcoming film, Thalapathy 64, under Kaithi director Lokesh Kanagaraj began rolling last month with the team now in Delhi for the second schedule. The film marks Vijay’s first-time association with Lokesh Kanagaraj after the young filmmaker made heads turn in the Tamil film industry in his debut venture, Maanagaram. Anirudh Ravichander is scoring the music for the film, which has a huge supporting cast among whom are are 96 actress Gouri G. Kishan, VJ Ramya Subramanian, Sriman, TV actor Chetan, director Azhagam Perumal, Malayalam star Lintu Rony, Meyaadha Maan fame Mathew Varghese, Vijay’s real life friends, Sanjeev and Srinath among others. Now, it has been revealed that actor Prem Kumar, who appeared as Vijay’s brother in last year's blockbuster, Sarkar, has joined the Thalapathy 64 shoot at Delhi and has posted a selfie with Lokesh Kanagaraj on his Twitter page. Check out the tweet below:

Likewise, a name that has been discussed quite a lot over the past few days, Brigida Saga as Pavi teacher from the hit Tamil web series, Aaha Kalyanam, is also now part of the Thalapathy 64 shoot as was being speculated for a while now. Pictures of Brigida Saga and Lintu Rony are doing the rounds across social networking forums where the two are seen having a good time with a few others. Have a look at the pictures below:

Announced for a summer 2020 worldwide theatrical release, Thalapathy 64 under the XB Film Creators banner has fans everywhere excited as it will see Vijay alongside ‘Makkal Selvan’ Vijay Sethupathi together for the first time on the big screen, Malavika Mohanan as the female lead followed by Shanthanu Bhagyaraj and Angamaly Diaries actor Antony Varghese in major starring roles.