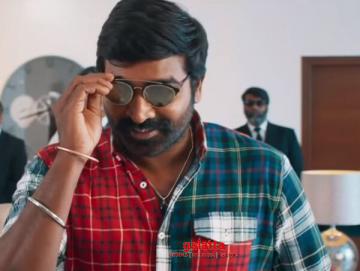 Vijay Sethupathi's much-awaited biggie Sangathamizhan is written and directed by Vijay Chandar and the film has Nivetha Pethuraj and Raashi Khanna as female leads. Sangathamizhan also has Ananya, Soori, Nassar, Ashutosh Rana, Mime Gopi, Sriman and Kalloori Vinoth in other important roles. The music for the film is composed by the duo Vivek - Mervin, and cinematography was handled by R Velraj. Sangathamizhan will also be dubbed in Telugu and the makers planning for big release there as well. A few days back, the makers revealed the Telugu title of the film as Vijay Sethupathi.

And now, the official Telugu teaser of Sangathamizhan has been released online. The Telugu version is the same as the Tamil teaser and the Telugu dialogues do make an impact. Check out the power-packed teaser of Vijay Sethupathi below,