Atharvaa - Mirnalini: New Romantic Video From Valmiki Is Out! 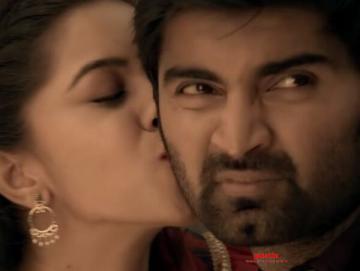 The official remake of the 2014 blockbuster Tamil gangster drama movie Jigarthanda is titled Valmiki and the project is directed by With Harish Shankar. Actor Varun Tej will reprise Bobby Simha’s role in the film. Atharvaa Murali will be playing Siddharth’s role of a young filmmaker in the film marking his Telugu debut. The young and beautiful Mirnalini Ravi will be seen reprising Laxmi Menon's role in the film and popular actress Pooja Hegde will also be seen in a pivotal role. Valmiki is bankrolled by Ram and Gopi Achanta under their banner 14 Reels Entertainment and music is scored by Mickey J Meyer. The teaser of Valmiki came out a few days back raising the hype over the film.

Valmiki was initially planned for a grand release on September 6th but the team has post-ponned the release to September 20th due to various reasons. The pre-release event of Valmiki happened on Sunday (September 15) and the team released the promo videos of the songs from the movie. One of the interesting songs from the movie is Gagana Veedhilo and the recent promo of the track has become a viral one.

Gagana Veedhilo is sung by Anurag Kulkarni and Sweta Subramanian with lyrics by Vanamali. The mesmerizing track from Mickey J Meyer is definitely a catchy number indeed. The love track between Atharvaa and Mirnalini is visualised in a beautiful manner. Check out the song below,