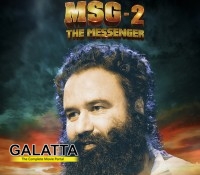 MSG-2 The Messenger, helmed by Saint Gurmeet Ram Rahim Singh, Ji Insan and Jeetu Arora Insan, stars Dera Sacha Sauda Sect head Gurmeet Ram Rahim Singh. The film is a sequel to MSG which was released pan India, last Friday (plz check the date, confirm and use this part). The Tamil version of the film will hit the big screens on October 1st. Here go the top reasons to watch the film:

* The film has a lot, in terms of storyline, based on true facts, which revolves around the lives of tribals and their reformation.

* The movie projects social menaces such as child marriage, superstitious beliefs and other rituals prevalent in society in a unique and entertaining manner.

*The film is a complete family entertainer without any age restrictions.

* The film has fascinating moments captured from a live concert shot with 1,75,000 people for the Song 'Party Dhoom Dhaam Se'.

* With the colourful trailer and energetic songs, the film promises to be a visual treat with beautiful landscapes and shots of the infamous Bhangarh Fort, one of the most haunted places in Asia, triggering your wild imagination.

* Most importantly, for the messenger himself and his exceptional energy, the film is definitely worth a watch!