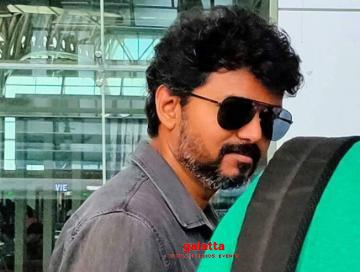 A film that has created massive curiosity ever since it went on floors last month, Thalapathy 64, Vijay’s next after his recently-released action sports drama, Bigil, is being directed by Kaithi fame Lokesh Kanagaraj. Believed to be an intense and gritty action thriller on the lines of Lokesh Kanagaraj’s previous two films, Thalapathy 64 includes Malavika Mohanan as the female lead with the popular actress now taking to her Twitter page to drop an important update saying she has resumed filming her portions at the ongoing second schedule at Delhi. Check out her tweet below:

Thalapathy 64 is Malavika Mohanan’s second major role in a high profile Tamil film after starring in ‘Superstar’ Rajinikanth’s blockbuster, Petta, earlier this year. The upcoming film will see her paired opposite Vijay while ‘Makkal Selvan’ Vijay Sethupathi, Shanthanu Bhagyaraj and Angamaly Diaries fame Antony Varghese have also been cast in major starring roles. Being produced by Vijay’s relative, Xavier Britto, under the XB Film Creators banner, Anirudh Ravichander is scoring music for Thalapathy 64, which has been announced for a summer 2020 release and is already carrying sky-high expectations due to its scale, cast and highly-talented crew.