Thalapathy 64 team shuts down false rumours - check it out! 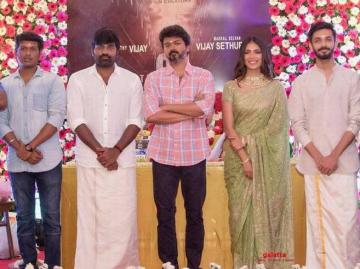 With Thalapathy Vijay's Bigil being the talk of the town for quite some time now, his next movie - Thalapathy 64 is already creating quite the buzz. It was announced that Vijay would be joining hands with maverick director Lokesh Kanagaraj for this movie and that it would be bankrolled by Xavier Britto under his XB Film Creators banner. The movie went on floors with an official pooja on October 2nd and it was announced that Makkal Selvan Vijay Sethupathi would also be a part of this project, with Rockstar Anirudh scoring the music. With all this happening, a leading media house had yesterday posted on their official Twitter handle that producer Xavier Britto was moving out of Thalapathy 64 and this set forth a lot of tremors.

However, responding to this post, the official Twitter handle of the production house - XB Film Creators responded to this post from the media house and slammed it to be just a rumour. They went on to request people to not spread such negative news and also gave out an important update about the progress of Thalapathy 64. The post went on to reveal that the shooting for this movie is going on as planned and that the unit is nearing the completion of the first schedule. This news has given amazing joy to all of Thalapathy fans and many of them slammed the media house for putting up such a post. In an interesting turn of events, the said media house took down their post and it is currently not available.

Thalapathy 64 also has Shanthnu Bhagyaraj playing a vital role and Petta fame Malavika Mohanan would be seen playing the female lead. Mollywood fame Anthony Varghese of Angamaly Diaries fame is also a part of this project. Meanwhile, Vijay and his Thalapathy 64 director Lokesh Kanagaraj would be clashing at the Box Office this Deepavali. Both Vijay's Bigil and Lokesh Kanagaraj's Kaithi starring Karthi in the lead, are slated to hit the screens for this Deepavali and it is a juicy clash in the offing. Watch this space for more updates...

We kindly request you not to spread such negative news which is not true. Shooting is going well as planned and we are nearing the completion of the first schedule. Thanks https://t.co/48MSPSJI1v