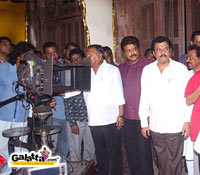 Suriyan Sattakalloori – it's not just the title of the film that is different; so is its hero’s name (Ghajini), its screenplay and climax! This Sivasakthi Pandian production is about a law college student, whose one deed rivets the entire nation’s attention and eventually wins him the President’s Award. Now, how often do you hear stories like these? Intriguing, is it not?

Bhavan, who directs this film apart from writing its wonderful story and screenplay, asserts that the climax would be a revelation, something that no one would expect! Looking for an equally intriguing place to shoot this exciting climax in, the crew selected Pondicherry’s defunct prison (built during British Raj) whose structural design awed them. By holding their shooting there, they have also created history; this the first-ever film shooting held in this prison. The crew also filmed a few stunt scenes there. Bhavan added that hero Ghajini’s performance in the climax scene was amazing and would earn him heaps of praise from the audience.

Renowned producer Khaja Moideen’s son Ghajini makes his debut in Suriyan Sattakalloori along with the heroine Mithra, another newcomer. Famous music director Deva composes the film’s music and also appears in one its songs! Suriyan Sattakalloori is one of the most promising films of the coming year.