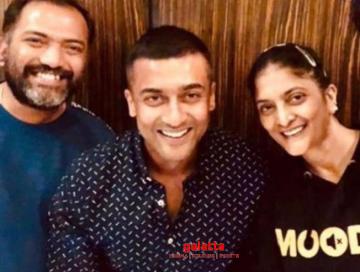 Suriya fans were given quite a lot to celebrate this year after the actor had two releases in the form of the political drama, NGK, and the action thriller, Kaappaan. The star had also announced his film, Soorarai Pottru, with Irudhi Suttru director Sudha Kongara under his 2D Entertainment banner in association with Sikhya Entertainment. Featuring music by G. V. Prakash Kumar, the film announced to come out as a summer 2020 release is reportedly loosely inspired from the life of G. R. Gopinath, the founder of the Air Deccan airline. That said, 2D Entertainment’s Rajsekarpandian had today during the audio launch of Karthi’s upcoming film, Thambi, revealed that the Soorarai Pottru teaser will out be as a Pongal 2020 treat. Composer GV Prakash too has now dropped an update on his Twitter page. Check it out below:

Filming on Soorarai Pottru wrapped up sometime back with post-production works being carried out at an active pace for a while now. It was recently revealed that Suriya had sung the rap portions for the ‘Maara’ theme in the film, which was penned by Arivu of The Casteless Collective. Excitement surrounding the film is huge, especially after the first look poster was released a few days back showing Suriya taking flight with his arms stretched out in the air symbolically suggesting he is en route to take the lead on as the chief of an airliner, who starts off from humble beginnings.

The Soorarai Pottru cast also includes Aparna Balamurali playing the female lead alongside Karunas, Kaali Venkat, among others in vital supporting roles while Bollywood actor Paresh Rawal is making his Tamil cinema debut in the role of the owner of an airliner named JAZ Airways where he will be appearing as Suriya’s chief competitor.