Suriya does it for Soorarai Pottru after Anjaan - check out what it is! 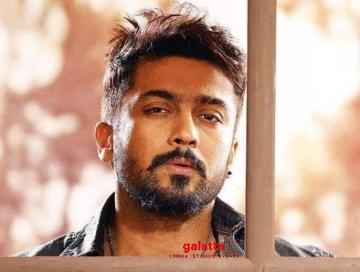 A highly exciting film right from the moment of its announcement earlier this year, Suriya’s upcoming biographical drama venture, Soorarai Pottru, under Irudhi Suttru fame Sudha Kongara’s direction wrapped up production sometime back. Announced to come out as a summer 2020 release under Suriya’s 2D Entertainment in association with Sikhya Entertainment, the film is reportedly loosely inspired from the life of G. R. Gopinath, the founder of the Air Deccan airline. That said, the film’s composer, G. V. Prakash Kumar has now dropped a massive update on his Twitter page stating the rap portions in the ‘Maara Theme’ track in Soorarai Pottru has been sung by none other than Suriya himself. Last week, GV Prakash had teased fans saying the rap portions written by Arivu of The Casteless Collective will be sung by someone whom he has never worked with before and Suriya singing it will no doubt be a big joy for his ardent fans everywhere. This is the second occasion Suriya is singing for a film he is starring in after Anjaan, released in 2014 in which he sang the chart-buster, 'Ek Do Teen' song, and had then contributed on the vocal front on the 'Cha Cha Charey' track in director Venkat Prabhu's delayed casino-based multi-starrer comedy film, Party.

Fans who have been following the developments in Soorarai Pottru will know that Suriya’s character name in the film was revealed to be as Maara aka. Nedumaran Rajangam not long back while Malayalam actress Aparna Balamurali, who plays his wife will be called Bommi. Apart from the film being quite ambitious, the Soorarai Pottru cast also includes names like Karunas, Kaali Venkat, among others in vital supporting roles while Bollywood actor Paresh Rawal, who is making his Tamil cinema debut, is playing the role of the owner of an airliner named JAZ Airways where he will be appearing as Suriya’s chief competitor. Soorarai Pottru also has some solid strength in its stunts department as the makers have roped in award-winning international stunt choreographer Greg Powell, who previously worked in notable Hollywood films such as Fast and Furious 6, Skyfall, Harry Potter and the Deathly Hallows (1&2), The Bourne Ultimatum, to name a few.