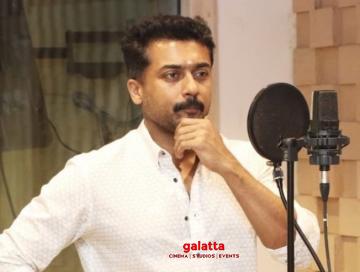 A film that created instant curiosity among actor Suriya’s fans is the upcoming biographical drama venture, Soorarai Pottru, under Irudhi Suttru fame Sudha Kongara’s direction. Produced by Suriya’s 2D Entertainment, the film featuring music by G. V. Prakash Kumar had its first look poster unveiled last week to a rousing response from fans. With the film also coming out in Telugu under the title, Aakaasam Nee Haddhu Ra, announced to be a summer 2020 release across the world, sources close to us have now revealed that Suriya has begun dubbing for his portions. There is massive excitement surrounding the project as it reportedly is loosely inspired from the life of G. R. Gopinath, the founder of the Air Deccan airline.

The character name of Suriya in the film was revealed to be as Maara aka. Nedumaran Rajangam while Malayalam actress Aparna Balamurali, who plays his wife will be called Bommi. With production on Soorarai Pottru wrapped up recently, composer G. V. Prakash Kumar, as well has now dropped a tweet on his Twitter page saying a theme track for Suriya’s character, Maara, has been written by Arivu of the popular Tamil rap band, The Casteless Collective. He further stated that the rap portions in the Maara theme track will be sung by someone with whom he has never worked with before and is going to be a special experience for fans everywhere. It wasn't too long back when GV Prakash announced that singer Harish Sivaramakrishnan from the popular band, Agam, had sung a romantic rock song in Soorarai Pottru, which also includes in its talented cast names like Bollywood actor Paresh Rawal, Karunas, Kaali Venkat, among others in vital supporting roles.