New Video Song From Sivappu Manjal Pachai Is Out! 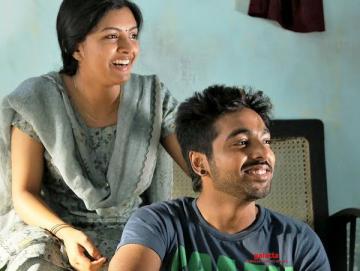 Sivappu Manjal Pachai written and directed by Sasi is a recently released multi starrer featuring Siddharth and GV Prakash in lead roles. The film has two leading actress' Lijomol Jose and Kashmira Pardeshi marking the latter's Tamil film debut. The film is produced by Ramesh P Pillai under the banner of Abhishek Films. Music for the film is composed by Siddhu Kumar. Sivappu Manjal Pachai has Siddharth playing the role of a traffic policeman while GV Prakash Kumar plays the role of a street racer in the film. Sivappu Manjal Pachai had a surprise release last Friday after Dhanush's ENPT backed out due to legal issues. The movie has opened to some positive reviews and is having a good run at the theatres.

The new video song from the film is titled Aazhi Soozhndha and the song visualises the sister-brother bond between GV Prakash and Lijomol Jose. The song composed by Siddhu Kumar is sung by Srikanth Hariharan with the lyrics written by Mohan Rajan. Here is the new video song,