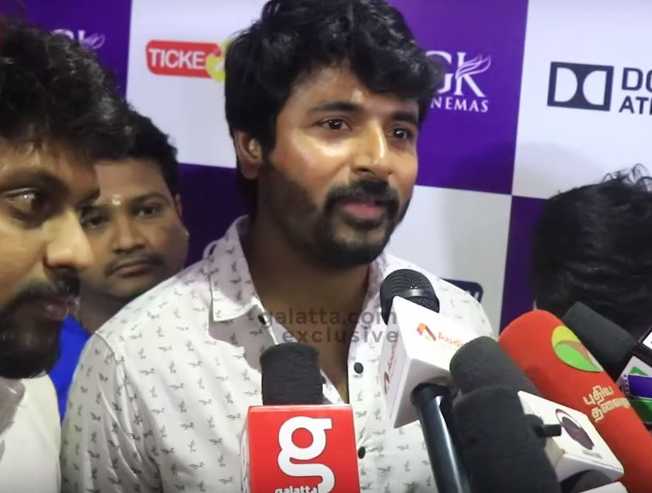 Today marks the release of Rio Raj's debut movie Nenjamundu Nermaiyundu Odu Raja, the second production venture of Sivakarthikeyan's SK Productions. The first show of the movie was at 5AM in the morning and Sivakarthikeyan, along with the movie's cast and crew watched it at GK Cinemas. While addressing media, he began with thanking them for supporting these youngsters with huge dreams. He added that the crew had had sleepless nights reasoning the works related to the release of the movie. Sivakarthikeyan also stated that the climax of the movie will impress the audience of every age group and a hope inducing one.

"I am very much content with the outcome of the movie and pleased to watch it with the crew", he added. The Seemaraja actor also said that he was happy to watch the credits of Karthik Venugopal appear on screen, who is the writer and director of NNOR. Furthermore, he also added that he was glad that Rio's launch in the silver screens happened with this socially responsible movie. Check out the rest of the emotional speech below!

Shirin Kanchwala, RJ Vigneshkanth, Radha Ravi, Nanjil Sampath are also featuring in NNOR playing important roles. The movie is made by the team of popular Tamil YouTube channel, Black Sheep. Karthik Venugopal of the same team is debuting as a director of Nenjamundu Nermaiyundu Odu Raja.