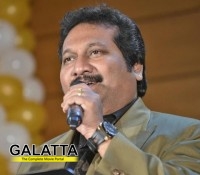 Mano, who is a well known for his singing, is all set to return to the silver screen with director Rudhran’s Vetri Selvan. He is playing one of the lead roles in the movie in which Ajmal and Radhika Apte play the lead pair. Ajmal plays the roles of a medical student while Mano will be seen playing the role of a music college professor. Sheriff, who won the Ungalil Yaar Prabhu Deva on Vijay TV, will be seen playing a dancer in the movie. The film revolves around these three characters, who have been rejected by the society and how they try to reform it.

Singer Mano has earlier acted in Kamal Haasan’s Singaravelan, for which he is still remembered for. The director says,” I don’t know if he wasn’t offered roles in films or he chose not to do films, it is sad that we haven’t utilized his skills.” The director adds that Mano’s sense of humour is unimaginable. His character will have the flavor of veteran actor NS Krishna. So the audience are in for comedy treat from Mano after his much appreciated act in Singaravelan.