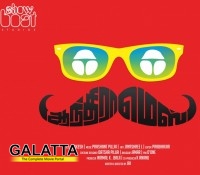 Nowadays everything begins with the title of a movie! Titles that are popular ensure the initial publicity of the film. This inspires young directors to think out of the box and come out with Novel titles. Show Boat Studios, a new production company launches their maiden production Andhra Mess. Following the recent Bollywood trend of Ad film makers turning towards movie Direction, Show Boat films have entered into their maiden venture of producing a whacky movie titled Andhra Mess, an exciting road movie on a group of small time crooks and the interesting events which take place post a failed robbery.

The chefs who have cooked up this interesting dish include, Jai, an avid ad film maker who has, in the past, been a part of reputed ad agencies and who is wielding the Director’s baton for the first time. Cinematography is by Mukesh, a former assistant of Mr.P.S.Vinodh. Music is by Prashanth Pillai, a composer who does not hesitate to introduce new genres in music to the audience and has successfully done so in other regional films like Shaitan and Amen. This movie is sure to satiate your primal, visual, and aural senses. This travel is recorded as a script in Andhra Mess.