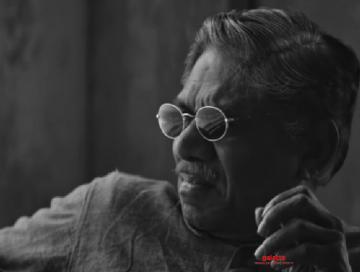 Actor Vasanth Ravi made a strikingly impressive debut with the acclaimed romantic drama, Taramani, directed by Ram. The newbie actor was applauded for his intense performance and he also went on to bag some honourable awards for the same. He is now back with his second film, Rocky, an action gangster film, directed by debutant Arun Matheswaran. Legendary director Bharathiraja plays a very important role in this film that also has popular dubbing artist Raveena Ravi and ace actress Rohini in supporting roles. The makers have now released the theatrical trailer of this film and it looks very promising.

It looks like director Arun has got an intense script on hand and the dark toned visuals give ample support. Half of the trailer has a monochromatic tone to it and that is one of the intriguing factors which holds the trailer. The dialogues need a special mention and it is one of the major highlights of this trailer. Rocky is expected to be an emotional revenge drama in an action backdrop. The film has music by ENPT sensation Darbuka Siva, cinematography by Shreyaas Krishna and editing by Nagooran.

Bankrolled by CR Manoj Kumar for RA Studios, Rocky is expected to hit the screens later this year. This super intense and promising trailer has been released on the official YouTube channel of Lahari Music who owns the film's audio rights. Check out the trailer of Bharathiraja - Vasanth Ravi starrer Rocky:

People looking for online information on ,Bharathiraja will find this news story useful.