Breaking: After Bigil, it is going to be with Rocky director! 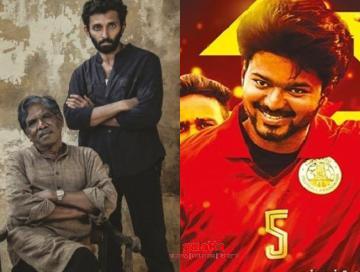 Screen Scene Media Entertainment is basking on the blockbuster success of their latest release, Bigil, starring Thalapathy Vijay. Screen Scene acquired the Tamil Nadu theatrical rights of this film from AGS Entertainment and released it in record number of screens. Screen Scene is also producing a few films, including Sundar C's Iruttu, Harish Kalyan's Dharala Prabhu, and Sasikumar's MGR Magan, which are in different stages of production. Meanwhile we have now got an exclusive update on their new film.

According to our sources, Screen Scene has signed director Arun Matheswaran of Rocky fame for an untitled new film. Rocky, starring Bharathiraja and Vasanth Ravi in the lead roles, is yet to hit the screens, but has already made a mark among the film buffs for its intriguingly cut trailer. Debut director Arun has shown immense promise as a filmmaker through Rocky's trailer and it looks like his next story has impressed Screen Scene.

In addition, we are told that it is going to be a female-centric film and the talks are said to be on with a leading actress to play the lead role. An official word on this project is awaited.