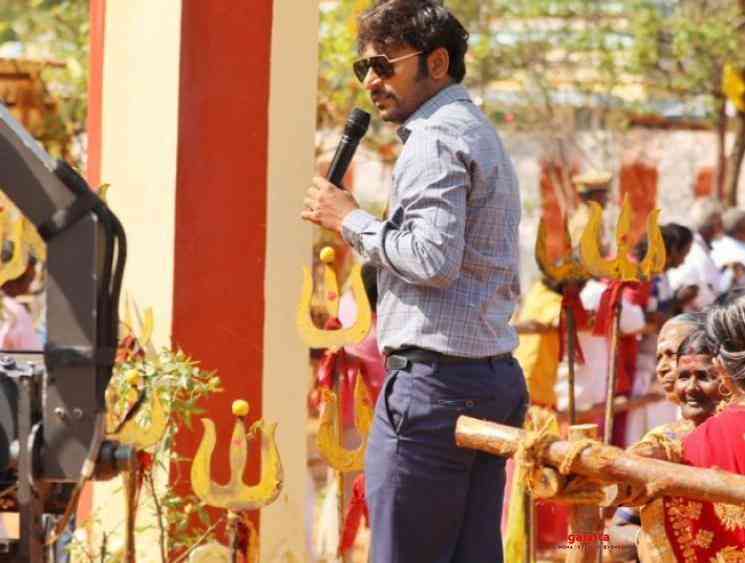 After making his debut as a full-fledged lead actor through the political comedy drama, LKG, RJ Balaji announced his directorial debut with Mookuthi Amman. Yes, he is directing this film along with NJ Saravanan who is also a debutant. Balaji has also penned the story, screenplay and dialogues for Mookuthi Amman that has Lady Superstar Nayanthara playing the titular lead character. Apart from handling all these crafts, Balaji is also playing one of the leads in the film and this will be his second outing as a lead after LKG.

The rest of the cast includes veterans Mouli and Oorvashi in supporting roles and Meyaadha Maan fame Indhuja in a cameo. The film went on floors a few weeks back at Kanyakumari with the main cast and crew. The latest official update is that the first schedule of the film has been completely wrapped. This schedule happened at Kanyakumari and Nagercoil and it lasted for 44 days without any break. Balaji took to his social media space to share this update for his fans and followers.

Balaji also added that with this schedule wrap, they have completed 90 percent of filming and have just a few more sequences left to be shot. He thanked the people of Kanyakumari and his full team for their complete co-ordination in making the shooting progress as per the plan. He also thanked his leading lady, Nayanthara and termed this schedule to be a very memorable one. Details about the next schedule are yet to be known and we will update you in the coming days. Produced by Vels Film International, Mookuthi Amman has music by Girishh of Aval fame, while the cinematography is handled by Dinesh Krishnan. The film is scheduled to hit the screens this summer.

And thats the schedule wrap .!😍
44 days of non-stop shoot of #MookuthiAmman .!😇 With that we complete 90 percent of the film .! Thank you God, people of Kanyakumari district, my amazing team and The brilliant Nayanthara for this memorable shoot.!🙏#Summer2020 here we come.!!!❤️ pic.twitter.com/uIyXNEYa94