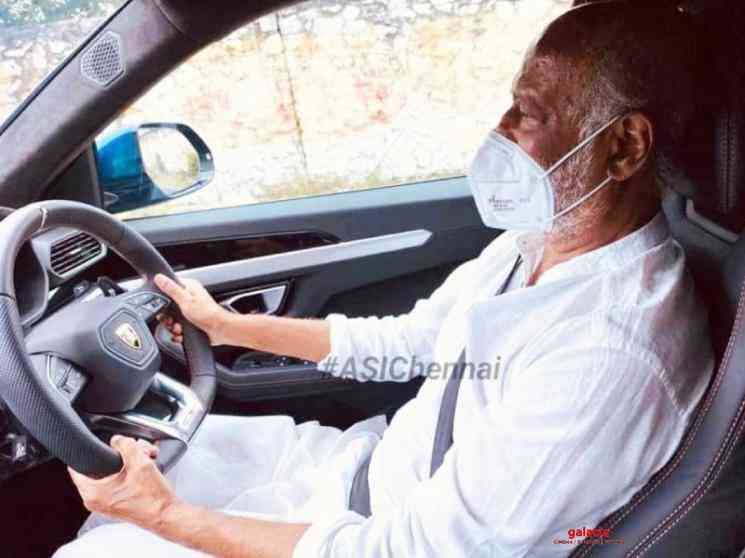 A new photo featuring Superstar Rajinikanth is now doing great rounds on social media and has gone viral in a matter of minutes after the release. In this new picture, we see Rajinikanth driving a Lamborghini car. He is captured wearing the seat belt and of course, the face mask, which happens to be mandatory during this pandemic situation. He is seen dressed up in all white and as always, the fans have been pleasantly surprised with this newly released picture. One doesn’t know the backstory of this picture, but who needs to know about it when the personality attracts you?

This picture is being shared on all fan pages on social media and it is surely garnering a lot of attention. We haven’t seen Rajinikanth on the driver’s seat much and hence this picture appeals much more than his other pictures.

On the professional side, Rajinikanth was last seen in the action drama, Darbar, directed by A.R.Murugadoss and produced by Lyca Productions. Despite getting mixed reviews from the critics, Darbar managed to satisfy the fans to a major extent. His next film will be Annaatthe, directed by Siva and produced by Sun Pictures. Annaatthe happens to be Siva’s next directorial after the blockbuster hit Viswasam and hence the expectations are humongous.

This rural family entertainer features four female leads and that includes Khushbu Sundar, Meena, Keerthy Suresh and Nayanthara. Prakash Raj, Soori, Sathish form the supporting cast. The film has music by D Imman, cinematography by Vetri and editing by Ruben. This movie is expected to showcase Rajinikanth in a completely different dimension and the fans are excitedly waiting to witness it on screen.

It has been quite a while since we saw Rajinikanth in the rural backdrop (excluding the minimal flashback portions in Petta) and it is going to be an interesting makeover to watch out for. The film is tentatively scheduled to hit the screens for next year’s Pongal, but the plans are subject to change as per the development in the pandemic situation.

Simultaneously, on the other side, Rajinikanth is also focusing on the political side of his career as Rajini Makkal Mandram is doing its best to help the needy during these testing times. For now, check out the newly released picture of Rajinikanth below: