Official Statement: Paravai Muniyamma is not dead and recovering well! 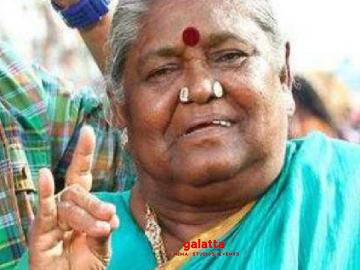 Folk singer Paravai Muniyamma made a splash on the big screens with her very first on-screen appearance in Chiyaan Vikram's movie Dhool. She played Jyothika's grandmother in the movie. Since then, she has acted in quite a few movies but has been out of the industry for quite sometime now. Sometime back, it came to light that she had taken ill and was suffering from health conditions. Recently, Ishari K Ganesh had spoken personally to the Dean of the Madurai Velammal Medical College Hospital & Reasearch Institute and gotten Muniyamma admitted in the hospital to undergo treatment.

Some reports suggested that her health had deteriorated in the past couple of days and from today morning, there have been rumours doing the rounds that she has passed away. However, slamming all these rumours, an official statement has been issued by the hospital itself. This statement says, "Popular folk singer and actor Paravai Muniyamma was admitted to the Velammal Medical College Hospital & Reasearch Institute due to poor health and has been getting treatment there. She is currently being treated by the top doctors of the institution and recovering well!"

The statement further reveals that she is well on the road to recovery and would be returning to her house soon. This statement also reveals that all the medical expenses for Paravai Muniyamma is being taken care of, by the hospital itself! This is some great news indeed. Earlier, Muniyamma had placed a request to the State Government to continue giving her son the pension it is currently giving her, in case of anything happening to her. Her son is differently-abled and she has already lost her husband a few years ago. Galatta Media wishes Paravai Muniyamma a speedy recovery!