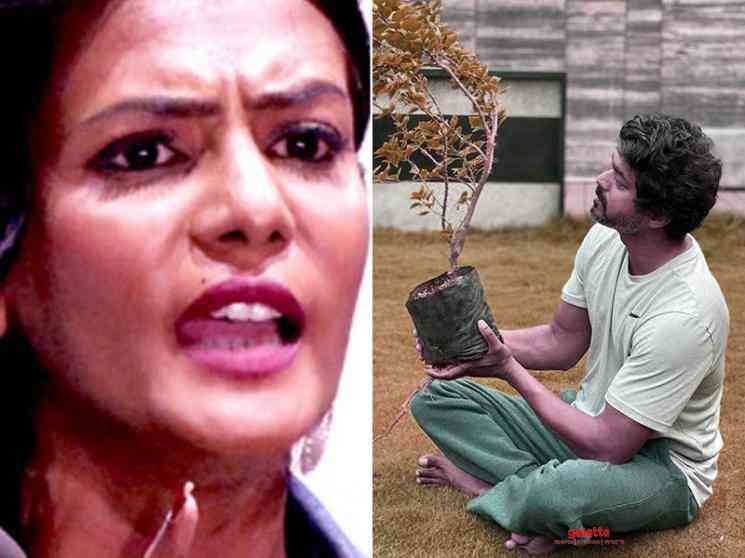 Meera Mithun has been making the news constantly for all the wrong reasons, her recent vulgar comments against Vijay’s wife and Jyotika didn’t go well with the public. She has been receiving criticisms from all quarters for her statement. But Meera Mithun doesn’t seem to stop her non-sense. She continues to annoy fans of both Vijay and Suriya by making controversial posts. Recently, Kaithi fame actor Dheena had made a post on Twitter saying - “I heard a bog is barking,” which looked like it was referring to Meera Mithun. The controversial Bigg Boss star in her reply, slammed Dheena, called him a dog, and dragged both Trisha and Vijay’s name in the issue - “Inform @trishtrashers. She is a @PetaIndia member so she can take care of those dogs or inform @actorvijay he can give solution in next audio launch.

Inform @trishtrashers. She is a @PetaIndia member so she can take care of those dogs or inform @actorvijay he can give solution in next audio launch. https://t.co/ZxTWJA9RAh

Earlier in the day, she had released another video statement justifying her actions - “People got angry when I spoke bad about Vijay’s wife, what people don’t understand is the fact that I would be facing the pain when other abuse me and my family. Only to let others know my pain, I had put up a derogatory comment on Vijay’s wife. But the industry was very quick to react to my comment, from Bharathiraja to Manobala, all of them have expressed their displeasure and have issued statements against me. They make comments stating that the producer council and Nadigar Sangam has to take action against me. Most welcome, I don’t mind about anyone taking action against me. But at the same time, please look into my issues, why the industry is avoiding me, why I have been replaced by other actors, why my scenes are removed from movies.”

Bigg Boss fame Meera Mithun is a controversial model-turned-film actress who rose to fame after featuring in Suriya’s Thaanaa Serndha Koottam. Her popularity grew when she participated in the television reality show Bigg Boss Tamil. After beginning her career as a print model, Meera gained popularity by participating in Indian beauty pageants. She subsequently chose to become an actress, making her debut with Gautham Menon’s Yennai Arindhaal but unfortunately her scene didn’t make it to the final cut, which eventually made 8 Thottakkal her debut film.

India to play in Australia from November 27th till January 19th!
More News