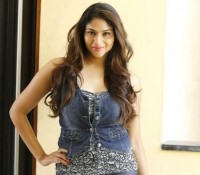 The upcoming comedy action flick Masala Padam, starring Bobby Simha, Mirchi Shiva and Gaurav in the lead, is all set to hit the big screens this weekend. The charming Lakshmi Devy, who plays the female lead stands out from other actresses with her double avatar. Apart from playing the lady love in the film, the actress has also penned the film's screenplay.

Apparently, the film's producer Vijaya Raghavendra and its director Laxman were friends of Lakshmi Devy and the trio have always wanted to do a film together. As they often discussed about films, the trio ended up with a new idea for a feature film. As the actress is so much involved into poetry, it was very easy for her adapt to writing screenplay. It must be noted that the multi-faceted actress in also a medicine student. Galatta media wishes the actress all success for Masala Padam and upcoming projects.

Touted to be a new generation film, the film completely revolves around movies and how each one is a critique on their own. Presented by Auraa Cinemas, this 'U' certified entertainer will hit the big screens on October 9th.

People looking for online information on Simha,S.P.Chandrakanth , will find this news story useful.