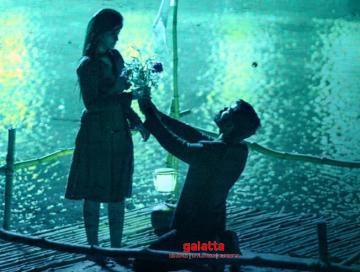 One of the most exciting films ever since it was announced in early 2016, director Gautham Menon’s Enai Noki Paayum Thota has seen numerous release date shuffles, but will finally be hitting theatres next week on November 29. Dhanush and Megha Akash are the lead pair followed by Sasikumar and Senthil Veerasamy in supporting roles with the upcoming action romantic thriller’s music by Darbuka Siva turning out to be a rage among fans. ENPT has been produced jointly by Ondraga Entertainment and Escape Artists Motion Pictures banners and is now being released worldwide by Vels Film International. With only a few days remaining for ENPT’s release, a 20 second promo video for the smash hit ‘Maruvaarthai’ song is now out on the official handle of Ondraga Entertainment’s YouTube channel.

‘Maruvaarthai’ sung by Sid Sriram with lyrics penned by Thamarai was incidentally the first track to be released as a single a couple of years back after which it went on to become a chart-buster. Prior to being introduced as the music composer, Darbuka Siva was being called as Mr. X by the Enai Noki Paayum Thota team as part of a marketing strategy, which eventually paid off as it raised quite a lot of curiosity among fans. The ‘Maruvaarthai’ song’s visuals teased in the new short promo will no doubt raise the expectations for the film furthermore ahead of its released next week.