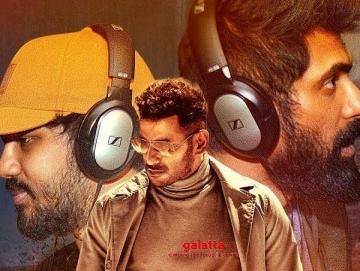 Actor Vishal's entertainer film titled Action is all set to hit the big screens this Friday (November 15th) an the promotions are happening at full swing. Action has two gorgeous ladies Tamannaah Bhatia and Aishwarya Lekshmi playing lady leads and also features Yogi Babu, Akanksha Puri, Kabir Duhan Singh, Ramki and others in important roles well. Action is directed by Sundar C and the film is bankrolled by R Ravindran under the banner of Trident Arts. This movie has music by Hiphop Tamizha, cinematography by Dudlee and editing by NB Srikanth.

The track titled Lights Camera Action from the movie is one of the hit numbers and the team has now released the Telugu version of the song. Hiphop Thamizha's fiery unrivalled track has vocals by Kaushik Krish and Rajan Chelliah. Baahubali star Rana Daggubati has sung the rap portions in the song. Lights Camera Action features Hiphop Tamizha, Kaushik Krish, Rajan Chelliah & Paul B Sailus. Check out the video below,