"You and I have a long way to go": Keerthy Suresh's sensational new statement 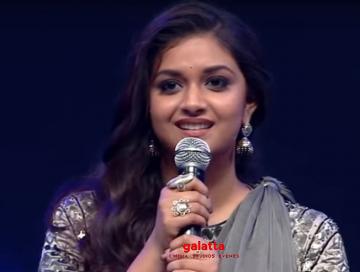 One of the most popular south Indian stars, Keerthy Suresh is now a household name across South India having appeared alongside leading stars in both Tamil and Telugu cinema. The top actress was not long back announced to be the winner of the National Film Award for Best Actress in 2018 for portraying actress Savitri in Mahanati, which was also released under the title, Nadigaiyar Thilagam, in Tamil. Last seen in Tamil in ‘Thalapathy’ Vijay’s blockbuster, Sarkar, Keerthy Suresh has now released a statement on her social networking pages on the occasion of completing six years since her acting debut as a heroine in 2013 with the Malayalam film, Geethaanjali, alongside Mohanlal. Check out her statement below:

Keerthy Suresh’s next film in Tamil will be Penguin being produced by director Karthik Subbaraj’s Stone Bench Creations. She will then be seen extensively in Telugu cinema in Miss India followed by Rang De alongside Nithiin, and as a sharpshooter in Good Luck Sakhi. Keerthy Suresh is also set to make her debut in Bollywood opposite Ajay Devgn in the biographical sports film titled, Maidaan, while also landing an important role in Mohanlal’s upcoming historical war film, Marakkar: Arabikadalinte Simham.