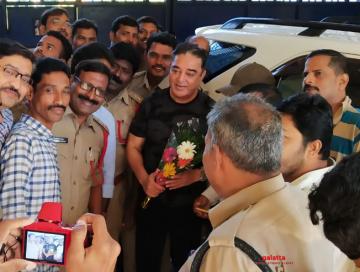 It is already known that Kamal Haasan has resumed the shoot for his upcoming much-anticipated film, Indian 2. The team had recently wrapped up some portion of their shoot in Chennai and now they have moved on to a very interesting place! Pictures and videos of Kamal Haasan and the Indian 2 team entering Rajahmundry Central Jail. Now, that sure is an interesting place to shoot! Reports state that the shoot in the jail will be going on for another 15 days.

In the photos that have been going viral, we see Kamal Haasan entering the jail premises and police officials as well as prison personnel greeting him. It seems that only Kamal Haasan will be shooting here and no other cast members. Indian 2, as already known, is the sequel to the hit 1996 film, Indian, which addressed the issues of corruption, bribery and many more. Though the film was stalled for a while, it seems to be on correct schedule now!