Gautham Menon's surprise before ENPT's release - check it out! 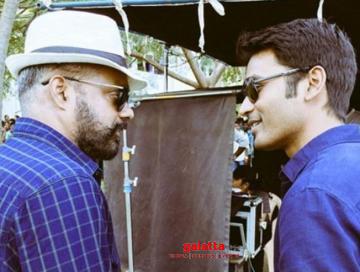 One of the most popular directors in Tamil cinema, Gautham Menon has carved a niche for himself over the years as a force to be reckoned with and has delivered several blockbusters among which include Minnale, Kaakha Kaakha, Vettaiyaadu Vilaiyaadu, Vaaranam Aayiram, Vinnaithaandi Varuvaayaa, Yennai Arindhaal and Achcham Enbadhu Madamaiyada. GVM’s last release, Achcham Enbadhu Madamaiyada, was in 2016 and the year had also incidentally seen him start work on his next two films - Enai Noki Paayum Thota and Dhruva Natchathiram. Starring Dhanush and Megha Akash, Enai Noki Paayum Thota is finally gearing up for a worldwide theatrical release later this week on the 29th after a three-year long wait. That said, Gautham Menon had also announced sometime back that he has been busy making another film titled, Joshua Imai Pol Khaaka, featuring Puppy actor Varun alongside Raahei, who will be making her acting debut. Being produced by Dr. Ishari K. Ganesh’s Vels Films International, the reputed banner has now announced that the Joshua Imai Pol Khaaka visual first look will be releasing on November 28 at 6PM. Check out the announcement poster below:

Joshua Imai Pol Khaaka, announced to come out in theatres on February 14, 2020 as a Valentine’s Day treat, it now remains to be seen if the visual first look will be the one that was screened as a teaser during the grand Vels Film International Vettri Vizha 2019 event last week. We had earlier this week revealed that Enai Noki Paayum Thota composer Darbuka Siva is scoring the music for Joshua Imai Pol Khaaka, which also has in its technical team several notable names among whom are cinematographer SR Kathir, editor Antony, art director Kumar Gangappan, Uthara Menon for the costume designs, stunts by Yannick Ben followed by Senthil Veerasamy as the Creative Producer.