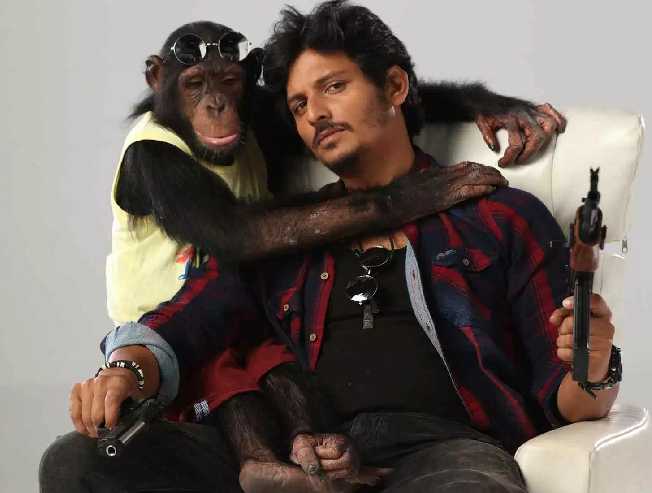 Gorilla is an average watch that lacks the punch!

After facing several hiccups in making it to the big screen, Jiiva’s Gorilla has finally released. This film made the noise right from its announcement because of the fact that a real life Chimpanzee will play an important character. With Arjun Reddy fame Shalini Pandey, Sathish, Vivek Prasanna, and Madhankumar forming the supporting cast, Gorilla is directed by Don Sandy of Mahabalipuram fame.

Talking about the premise, Jeeva (Jiiva) and his friends, including Kong, the chimpanzee, are in dire need of money for their own personal reasons. They decide to rob a bank to meet their needs. The Police officials surround outside the bank and our protagonist and team is locked inside the bank. How did they escape out of the robbery scene and did they accomplish their plan forms the rest of the plot. Jiiva looks casual and natural on screen. Shalini Pandey doesn’t have much to do in this film and her character has no substance.

Sathish’s comedy one liners do not lend support for the comic factor, and only a very selective set of counters work well. Madhankumar’s performance had a little amount of artificiality and that in turn made the emotions look less impactful. Kong, the Chimpanzee, is impressive that brings in few laughs. Kong will attract the kids, but the makers could have definitely used more of the animal to make the drama exciting and engaging.

The first half doesn’t delve into the story much and the only highpoint is the bank robbery scene. Even that scene, for that matter, leaves no impact and there is neither tension nor humor. The entire robbery sequence is clumsily executed and doesn’t engage you. The intended humour at many places doesn’t evoke any laughter. The love blooms out of nowhere and you could only worry about it. The mainstream films portray love in such a lethargic and easy manner and you wonder when is this going to stop. A love angle that doesn’t add anything at all to the movie.

These days, every director out there wants to tell a social message and they take up the farmers’ topic. Of late, Tamil cinema has seen a lot of films that talk about farmers plight, and Gorilla is the latest addition. The angle looked melodramatic and totally out of place initially, but when it was infused with the film’s conflict, it looked quite believable. The second half has a few impressive moments that lift the overall experience, but at the same time, it doesn’t make things complete. The writing is weak and lacks logic at many places. Until the very last, you are not explained about the relationship of Jeeva and Kong.

You do not understand why Jeeva gets possessive about Kong as their bonding isn't established rightly. As said earlier, the Kong doesn’t do much with the proceedings and hence the drama is flat. The film isn’t completely engaging or entertaining, thereby making it an average watch. The social message angle will work better for the mainstream audiences due to its relevance. Sam CS’ music aids the film to an extent.

The romantic number ‘Yaaradiyo’ is an impressive listen. Gurudev’s visuals and Ruben’s editing are functional. Don Sandy had a good premise in hand, which has fallen flat with a weak and boring screenplay, added with a not-so-effective execution.