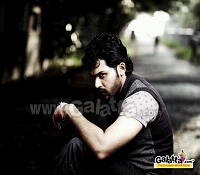 Karthi Sivakumar, the rough and tough hero of Paruthi Veeran, is celebrating his birthday today. Greatly inspired by his father Sivakumar and brother Suriya, Karthi stepped into filmdom after a brief stint as assistant to Mani Ratnam in Ayudha Ezhuthu.

After graduating from New York State University in Industrial Engineering, Karthi's career began as a consultant in an engineering firm in Chennai. Soon, he grew tired of the job and joined director Mani Ratnam's crew.

Ameer's Paruthi Veeran script greatly impressed Karthi. He understood the hard work he had to put in for the role; liking the challenge and adventure involved, he took up the offer. His performance in Paruthi Veeran has received wide appreciation.

More than two years after his debut in Paruthi Veeran, Karthi's next release was Aayirathil Oruvan. Though the movie received mixed responses, there is no doubt his performance in the movie was stupendous and the movie is an important chapter in Tamil cinema. Then came Paiyya, a complete image makeover for the handsome hunk, from an uncouth rural youth in Paruthi Veeran to the utterly sophisticated software professional in Paiyya.

The actor's upcoming projects include Naan Mahan Alla directed by Suseendran, followed by Vada Chennai directed by Vettrimaran. The buzz is that the handsome actor will play the role of a good fisherman who unwittingly falls in the trap of a mafia gang. As usual, this Vettrimaran flick will be set in the bylanes of Chennai with a realistic touch. Karthi will also star in the Tamil remake of the Telugu hit Vikramarkudu.

We wish him a very happy birthday!