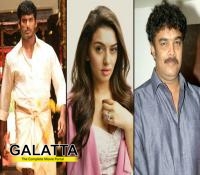 Director Sundar C is all geared up for his next release Aambala starring Vishal and a huge list of well known actors like Hansika, Santhanam, Ramya Krishnan, Vaibhav Reddy, Madhurima, Aishwarya, Sathish and Kiran. The audio was released on 27th Dec and has received positive reviews from fans. Hiphop Tamizha, an independent musician is being introduced as a music director in the movie.

In the audio launch function, Sundar C said that Hansika has become his lucky charm as this is their third movie together. He also said that he felt bad for showing her as a ghost in his previous film Aranmanai, so he has compensated in this film by showing her more beautiful than any of her earlier movies. Galatta Media wishes huge success to the Aambala team.