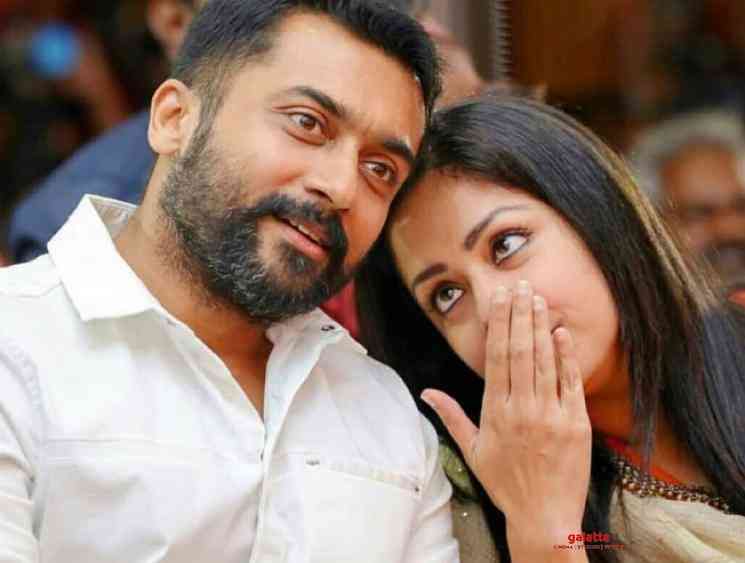 Suriya and Jyotika are one of the most loved celebrity couples in K-town and the duo are always known for setting couple goals and of course, their beautiful chemistry. In cinema, Suriya and Jyotika have acted together in 6 films and that includes Poovellam Kettuppar, Uyirile Kalanthathu, Kaakha Kaakha, Perazhagan, Mayavi, and Sillunu Oru Kaadhal. Post their wedding, the duo have not acted together yet and Jyotika has only been featured in Suriya’s production. Jyotika’s last outing, Ponmagal Vandhal, produced by Suriya, released directly on Prime Video with a good reception from the family audience for its noble message and intent.

Having said that, popular YouTuber Ahmed Meeran took to his Twitter page to express his interest to see Suriya and Jyotika act together in a film under the direction of Sillu Karuppatti fame Halitha Shameem. He said that it would be great to see a breezy, feel-good film like Charlie and Kumbalangi Nights from Suriya and Jyotika. Halitha acknowledged the tweet and replied with a smiley.

Additionally, while replying to another fan, Halitha said she will pitch a script to Suriya and Jyotika for sure in the coming days. She tweeted, “I will definitely pitch a script to them”, and this tweet has gone viral among the fans who are looking forward to this collaboration. Halitha Shameem’s Sillu Karuppatti is one of the most loved films of last year which became a successful venture at the box office.

It also earned the love of the Tamil audience. The film got its proper release and due recognition only after Suriya acquired the theatrical distribution rights of the film and there has been no look back since then. It is a known fact that Suriya and Jyotika loved Sillu Karuppatti and Jyotika even talked about the film in an award show, expressing her love for the film and Halitha Shameem’s writing.

Having said that, it would indeed be great to see Halitha direct Suriya and Jyotika together and let us hope it happens soon. The comeback of Suriya and Jyotika as an onscreen pair will definitely garner a lot of attention and buzz on social media.

Currently, Halitha Shameem has two projects in her line up - Aelay and Minmini. Aelay stars Samuthirakani and Kaala fame Manikandan in the lead roles and it is produced by Pushkar - Gayathri’s Wall Watcher Films, in association with Sashikanth's Y Not Studios. The shooting of this is complete and the makers are currently focussing on the post-production works. Then, there is Minmini, which is being made as a one of a kind attempt in Tamil cinema. Check out the tweets of Halitha Shameem below:

I will definitely pitch a script to them. ❤️