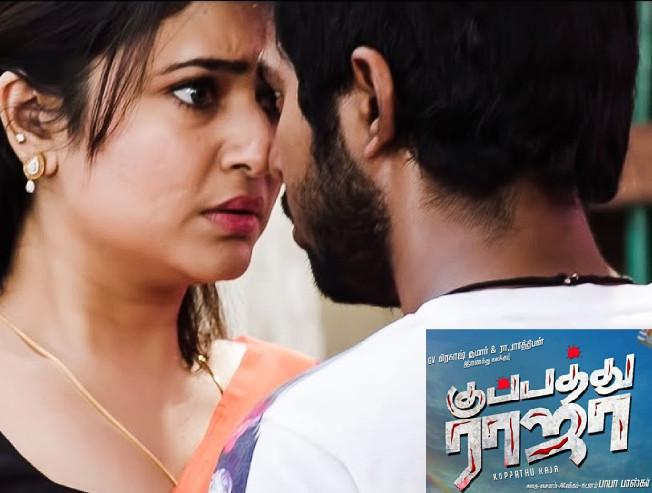 G.V.Prakash starrer Kuppathu Raja is the latest addition to the list of old wine in an old bottle type of films with no convincing plot as such. To be precise, there is no story at all and the writing is vague and completely flat. The film deals with the illegal activities that happen in a slum, set in North Madras. The graph of the writing doesn't seem to project upwards. It is not linear either. The runtime of the film is 2 hours and 7 minutes, and despite the shorter runtime, you feel like checking your watch for the time.

A bundle of uninteresting scenes are compiled and put together that makes the whole affair very boring. While talking about this, you seem to notice that there are a lot of unwanted scenes that add no value. It seems as if the director and G.V.Prakash thought "Local na Gethu" and placed the film in that locality. How many more films are we going to see in these lines? When the premise of the story seems to demand that, it is fine. But, unnecessary glorification of "Naanga Dhan Gethu", "Local na Mass" type dialogues and lines aren't of any use.

The audience isn't offered with any exciting happenings at any juncture. Even if it is a templated commercial masala entertainer, it should engage the audience, which Kuppathu Raja fails to do. A very minimal number of scenes, like the one where Parthiban comes in defence for G.V.Prakash, are well executed and presented on screen.

Not to offend, but G.V.Prakash looks completely artificial in this film and whatever he does, you don't feel the emotions. He cries for the loss of his family member, feels bad for fighting with his best friends, shows anger against the evil forces, but no emotion is transferred to the audience. After delivering two contrastingly intense performances through films like Naachiyaar and Sarvam Thaala Mayam, this isn't how his next film should have been. Radhakrishnan Parthiban is a man who is capable of pulling off any role and he does a fine job in Kuppathu Raja.

Parthiban and M.S.Bhaskar are the probable positive aspects in the film who deliver justifiable performances. Palak Lalwani could have wished for a better debut in Tamil. She doesn't fit into the zone of this film and her dubbing is out of sync at many places. You also get a feeling if you're watching an other language film. Similarly, Poonam Bajwa is also wasted in a meagre character. After last week's Airaa, one more disappointing outing for Yogi Babu and this also hints us that the comedy sensation is being over exposed. Most of the oneliners are like "Poda Grinder Vaaya, Podi Tractor Vandi" and all random ones that question the humour factor.

On the technical front, Mahesh Muthuswami's visuals and Praveen's editing is functional, while G.V.Prakash doesn't make an impact on the music as well. The background score fails to elevate the mood of a scene. Baba Baskar is a noted choreographer whose dance moves are enjoyed in the theatres when big stars perform on the big screen. But, as a director, Kuppathu Raja doesn't sound to be a memorable debut. The writing is vague and incomplete, and the execution is also clumsy.

There is no finesse or a proper packaging to make it a commercially satisfying masala entertainer. Kollywood audience enjoys masala commercial entertainers too, given the fact, it should engage and entertain them. Kuppathu Raja is a very badly made film that has one or two good sequences (you don't really know why few scenes are even there in the film). You really want to tell some good things about the film, but unfortunately, the makers don't allow you to.

After coming out of the film, one might wonder how this even got transformed into a film and how actors agreed to be a part of it and also how, a producer came forward to bankroll it, as there are lots and lots of young budding talents waiting with fresher scripts.

VERDICT: A clumsily made masala entertainer that has no significance in any aspect.
RATING: 1.25/5