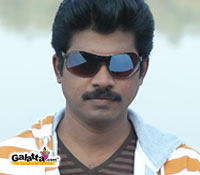 National Award winning lyricist Pa. Vijay's debut acting venture Gnabagangal, directed by Jeevan, is reportedly being dubbed in Korean by Korean producer Moon Louis. Ifï¿½reports are to be believed, Gnabagangal would be the first South Indianï¿½film to be dubbed in Korean. Gnabagangal is expected to grace screens on July 3.

It is heard that Gnabagangal is based on a real life story that happened to Pa. Vijay's very close friend, Kathiravan. The film actually revolves around Kathiravan, who fell in love with his neighbour Meera. Meera went on to break his heart by getting married to someone else. Following this, he returned home to fall sick and die. The film is a tribute to Kathiravan, who was an unsung hero in Pa. Vijay's eyes.

The story has been written with Kathiravan's diary asï¿½reference. There is no overdose of glamour, no double-meaning dialogues and no villain in the film. Sridevika, a Palakkad Malayalee who acted in Sarithiram and Chembada (Malayalam), is the heroine. Jeevan wields the camera.ï¿½Music is composed by James Vick.