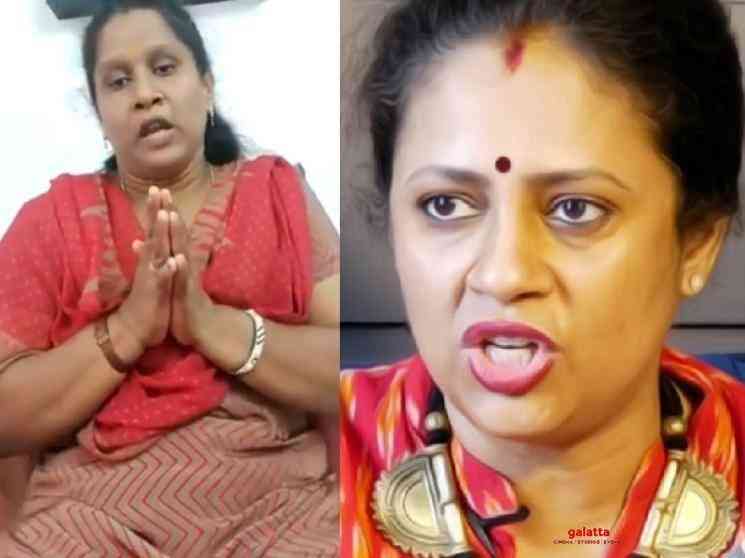 For the past few days, the entire social media and YouTube is abuzz about Vanitha Vijayakumar and the controversies surrounding her. As we know, Vanitha got married to Peter Paul on June 27 and ever since then, there have been numerous controversies. Peter Paul's first wife Elizabeth Helen came into the picture and demanded justice for her children and claimed that she is yet to be legally divorced from Peter. This news took everyone by shock and a lot of people came in support of her. Being a commoner, she was supported by a lot of people in Tamil Nadu and it was evident through her interviews on YouTube.

People from the film industry like producer Ravindar Chandrasekaran, Lakshmy Ramakrishnan, Kasthuri Shankar came out in support of Elizabeth. Things got nasty in the last few days when an ugly argument broke out between Vanitha, Lakshmy and Kasthuri. Vanitha’s fight with Lakshmy Ramakrishnan created a huge buzz on the internet and the netizens started to carry out memes based on it. Having said this, Elizabeth Helen has now spoken in a video, apologizing to Lakshmy Ramakrishnan for what she’s been put into.

Elizabeth said, "Lakshmy madam talked to Vanitha on behalf of me and she voiced for me. She (Lakshmy) came into this topic only when I requested her to help me in this issue. But, Vanitha used unparliamentary words and abused her verbally which wasn't right. Vanitha hurt Lakshmy ma'am with her inappropriate behaviour and when I realise that it is because of me, it pains me. She didn't even respect Lakshmy madam for her age and stature.

This incident is only running inside my mind for the past two days and it has hurt me deeply. I do not know if Vanitha will apologize for what she spoke, but I'm indebted to you for what you've done for us and my heartfelt apologies to you ma'am. You did this only for us." Lakshmy Ramakrishnan shared this video on her Twitter page and said that Elizabeth is a strong woman. The talented actor turned director shared Elizabeth’s video and wrote, “#Elizabeth is apologising though she did nothing wrong, she feels bad that she put us in trouble! She is a strong woman #Feminism #Empowerment is not about destroying another woman.” You can watch the full video in the tweet embedded below:

#Elizabeth is apologising though she did nothing wrong, she feels bad that she put us in trouble! She is a strong woman #Feminism #Empowerment is not about destroying another woman . pic.twitter.com/QwCGic04xX