dil raju teams up with ravi babu for aaviri

Dil Raju teams up with Ravi Babu for a horror flick titled Aaviri! 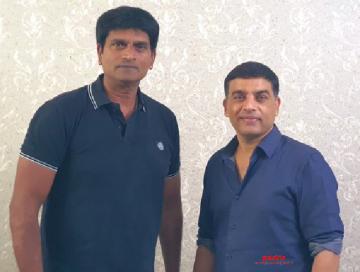 Dil Raju is one such producer who is known for his choice of films with good content. Till date, the producer has made sure that whatever project he takes up, would do well with the audience. Now, an interesting update has come forward regarding this producer’s next! As a welcome change, the producer has teamed up with actor-filmmaker Ravi Babu for a horror flick! Although the first look of the film was unveiled back on New Year’s Day, today morning another poster has been unveiled announcing the collaboration with Dil Raju!

What caught everyone’s attention was the quirky poster which shows a head inside a pressure cooker. Although this is being termed as the first look, back in January the look that was released had a girl dancing inside a jar. Both the looks so far are very intriguing and could mean a lot of things. For now all that is known is that it is a horror genre film. Aaviri stars Ravi Babu, Neha Chauhan, Sri Muktha, Bharani Shankar and Mukhtar Khan in key roles.

The film is slated for an October release and it sure will be interesting to see if it is able to strike a chord with the people or not! Stay tuned for further updates…