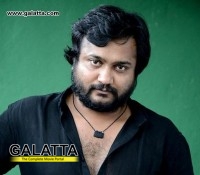 Masala Padam, the film which has been the talk of the town ever since the title was announced has received a decent opening on its first day. Starring Bobby Simha, Mirchi Shiva, Gaurav and Lakshmi Devy in the lead, the film is directed by Laxman and Produced By Vijaya Ragavendra of All in Pictures and released by Auraa pictures.

About the film, Bobby Simha says, "Masala Padam is a unique attempt with different conceptualization. When Laxman narrated the story to me, I could visualize the scenes and I confessed Lakshman that I was expecting one such story for a pretty long time. I very well knew that the output of the movie would be good and also that it was flabbergasting and concept gripping."

He added, "Masala Padam revolves around the culture of movies and movie critics. It has also explored how cinema and real life are connected." While talking about his role in the film, the versatile actor said, "I play the role of a street goon named Amuthan. I don’t have any combination scenes with Shiva but I used to hit on the shooting spots and enjoy watching his dialogue delivery and body language."

The actor had all praise for the music director Karthick Acharya. "I was impressed the way his BGM was composed, it made the audience to sustain the mood of the scene," said the actor.

"The stereotype concept of cinema lovers will be Masala Padam from today, the screens are getting filled rapidly and I am happy that film lovers are encouraging Masala Padam," Bobby Simha signed off.