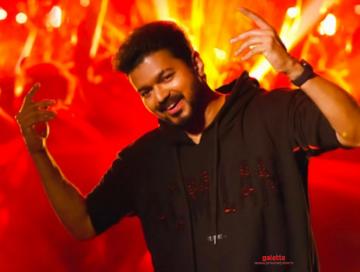 A film that has caught the attention of fans everywhere ever since it went on floors earlier this year, Bigil, starring ‘Thalapathy’ Vijay marks the third occasion the superstar is teaming with director Atlee after their previous blockbusters, Theri and Mersal. Produced by AGS Entertainment, two tracks composed by A. R. Rahman - ‘Singappenney’ and ‘Verithanam’ - from the upcoming action sports entertainer have gone on to receive a thunderous response. ‘Verithanam’ sung by Vijiay with lyrics penned by Vivek has become a smash success for its peppy tune, pulsating beats and catchy verses and has garnered over 15 million views on YouTube after it was released last week. With the song as its title going on to become a verithanam hit, it has run into a bit of a controversy now after fans on Twitter stated the term the word ‘Pullaingo’ was copied. Responding to the allegations, lyricist Vivek stated the word ‘Pullaingo’ was first used in the ‘Mersal Arasan’ song in Mersal in 2017 while also adding it is a commonly used term in North Chennai. He further attached a screenshot stating ‘Verithanam’ was completed on January 25 this year while the song which fans are referring to was first published on March 10, 2019. Check out lyricist Vivek’s tweet and the screenshot he has attached below: