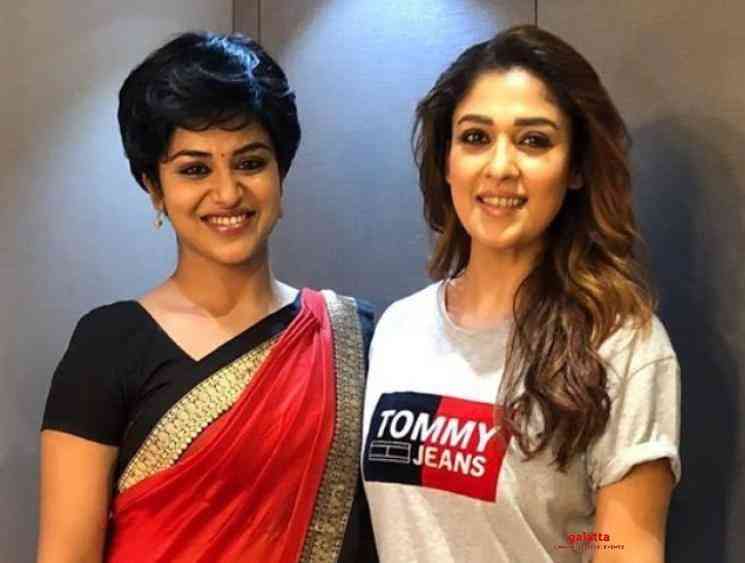 Actress Nayanthara's first major 2020 release is going to be alongside 'Superstar' Rajinikanth in the upcoming cop action drama, Darbar, hitting screens on January 9. The reigning South Indian star was also announced last year to be part of a film titled Mookuthi Amman, which will mark the directorial debut of popular radio jockey turned actor RJ Balaji along with NJ Saravanan. Being produced by Dr. Ishari K. Ganesh’s Vels Films International, filming on Mookuthi Amman kicked off in November at Nagercoil after a ritual pooja at the Bhagavathi Amman Temple in Kanyakumari. With filming progressing at a steady pace, it has now been revealed that actress Indhuja Ravichandran has been cast in Mookuthi Amman for a pivotal cameo role and had shot her portions recently at Nagercoil. This will be the second time Indhuja will be seen alongside Nayanthara after starring in 'Thalapathy' Vijay's blockbuster action sports entertainer, Bigil, under Atlee's direction last year.

Mookuthi Amman will see Nayanthara and RJ Balaji in lead roles alongside veteran artistes Moulee and Urvashi followed by Thadam heroine Smruthi Venkat in major supporting roles and now, Indhuja in a cameo. Aval composer Girish Gopalakrishnan is scoring the film's music followed by Dinesh Krishnan of Thaanaa Serndha Koottam fame handling cinematography while ‘Stunt’ Silva is overseeing the action sequences. Selva RK of Pariyerum Perumal fame is the editor, Divya Nagarajan and Anu Vardhan are the costume designers and Vijayakumar is the art director. Mookuthi Amman is incidentally the third occasion RJ Balaji and Nayanthara will be sharing screen space after they appeared in the 2015 smash hit, Naanum Rowdydhaan. and Sivakarthikeyan's Velaikkaran in 2017.