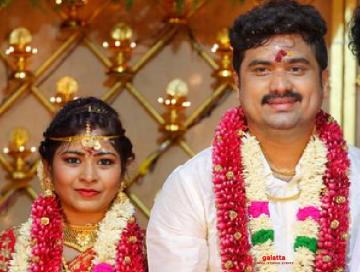 Kuppathu Raja, the directorial debut of dance choreographer Baba Bhaskar, having GV Prakash, Pallak Lalwani, Poonam Bajwa, Parthiban and Yogi Babu in the lead, was produced by M Saravanan, T Saravanan and S Siraj for their S FOCUSS banner. This movie released on April 5th, early this year and received mixed reviews. One of this movie's producers - M Saravanan, got married in a grand function, recently. He tied the knot with Sravya Keerthana. Many leading celebrities graced this function and we also got to see Bigg Boss 3 fame Saravanan, at the event.

A very popular contestant of Bigg Boss Tamil Season 3, Saravanan's simple and rustic ways appealed to the audiences. However, his crude confession of having groped women on public transport during his youth, caused him to be eliminated from the show, silently. He has since not been seen in public and has also not interacted much with the media, especially there has been no word from him regarding his abrupt elimination from the show. Saravanan was fondly called 'Chitthappu' on the show, taken from how Karthi addressed him in the movie Paruthiveeran.