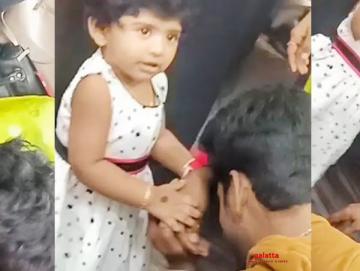 After 105 days, the third season of the Bigg Boss show came to an end on Sunday (October 7th). In the grand finale, Mugen Rao won the prestigious title as Sandy became runner-up with Losliya and Sherin securing the next two places respectively. This third season was one of the most entertaining as it had some unique talents. As everyone knew, Sandy was one of the main reasons for the success of this season and episodes of Sandy with his wife Sylvia and daughter Tasha was so lovable.

And now, a video has been circulating online where Sandy can be seen playing with his daughter Tasha who is fondly called as Lala by Sandy and family. The video is reportedly shot after the ending of Bigg Boss 3 grand finale. Sandy's love for Tasha is immeasurable as he has even cried many times inside the Bigg Boss house whenever he missed his daughter. The new cute video of Sandy and Tasha has gone viral on social media. Check out the video below,