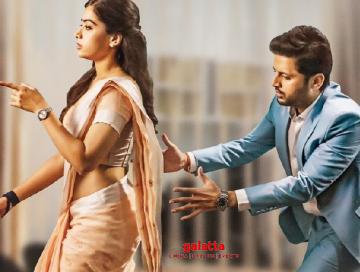 South Indian sensation Rashmika Mandanna was last seen in Vijay Deverakonda's Dear Comrade, in which, she played the memorable character of Lilly. Her next film in Telugu would be Bheeshma, the romantic comedy entertainer featuring Nithiin as the male lead. This film is directed by Venky Kudumula and produced by Suryadevara Naga Vamsi under the banner of Sithara Entertainments. The makers have now released the first glimpse of the film, a very short teaser and this one is sure to create some waves on social media.

While the teaser will go viral among the youngsters, on the other hand, it could possibly be criticised by the critics for objectifying the female lead. It can be noted that the first look poster which had this same theme, came into a strong criticism among a section of critics. The film will have music by Mahati Swara Sagar, cinematography by Sai Sriram, and editing by Navin Nooli. Bheeshma is scheduled to hit the screens on February 21, 2020.

The audio rights of this film is bagged by Aditya Music. Check out the newly released glimpse of Bheeshma featuring Nithiin and Rashmika Mandanna: