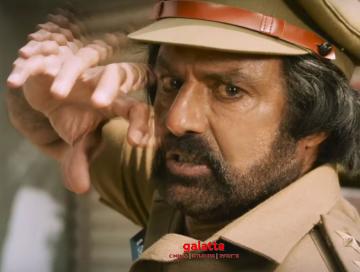 One of the biggest superstars in Telugu cinema, Nandamuri Balakrishna’s upcoming film, Ruler, marks his second consecutive film with blockbuster director K. S. Ravikumar after last year’s Jai Simha. Gearing up for a theatrical release on December 20, Ruler is Balayya’s 105th film and has been produced under C. Kalyan’s CK Entertainments in association with Happy Movies banner. Apart from Balakrishna, the film billed to be an out-and-out action flick also includes Vedhika and Sonal Chauhan as the female leads followed by Prakash Raj and Bhumika Chawla in supporting roles with music composed by Chirantan Bhatt. With the film gearing up for a massive worldwide release next month, the makers have now released an action-packed teaser, which has all the trademark elements of a NBK film.

Expectations for Ruler have been high ever since Balakrishna's two looks in the film were revealed in the posters released earlier this year among which one had the superstar appearing as a mafia don following which it was made known that he would also be playing the role of a cop. There is huge excitement surrounding the film as it will see Balayya return to the big screen after a gap of nearly two years and fans have been upbeat about witnessing yet another cracker of an entertainer with Ruler.

Check out Nandamuri Balakrishna in action in the Ruler teaser below: