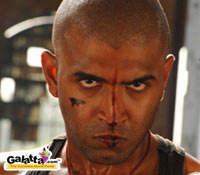 Arun Vijay is on Cloud Nine. His upcoming film Maanja Velu is all set to grace theatres this month. The actor has already tasted the fruits of labour in his earlier flick Malai Malai. Success has been eluding this young man for quite a while, but his never-say-die spirit has paid off well.

Sources say that Arun Vijay has performed some daredevil action sequences for Maanja Velu. “Yes, I was upside down for almost six days for an action sequence. In fact, every time I had to get back to a normal position, I had to follow a procedure because it is very risky to get upright immediately,” he recalled.

“We’re glad that it’s been made by the same team that gave the hit Malai Malai. This time too, we’ve ensured that all the essentials of commercial film making have been used in right measure,” he said.

The actor feels that the USP of the film will be its climax, where he will appear bald. “This climax will be unexpected and will change the feel of the film. We shot for almost 18 days for it and I’m sure it will make some people cry,” he revealed.

Yesteryear heart-throb Karthik is making a comeback of sorts with this movie. “His part is outstanding; it was a challenge for me to perform better with him sharing screen space with me. In fact, in one of the scenes, there was healthy competition between us. It was a comedy scene. And Karthik sir was taking it beyond the lines given to us. I knew he’d do something like that and was ready for it. The particular scene has been retained in the film,” he added.