WATCH: New Sneak Peek From Vishal's Action Is Out! 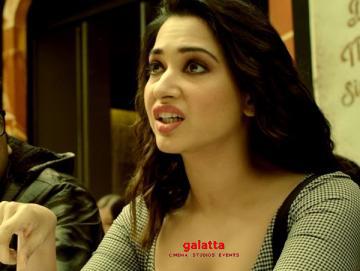 Vishal and Sundar C teamed up for the third time for the entertainer film titled Action and the film had a grand release in both Tamil and Telugu last Friday (November 15th). Action has two lady leads in the name of Tamannaah Bhatia and Aishwarya Lekshmi. The film also features Yogi Babu, Akanksha Puri, Kabir Duhan Singh, Ramki and others in important roles well. Action is bankrolled by R Ravindran under the banner of Trident Arts and the film has music by Hiphop Tamizha, cinematography by Dudlee and editing by NB Srikanth.

Following the release of the film, the maker has been releasing interesting promotional video from the movie. The latest video from the movie is a sneak peek featuring Vishal, Tamannaah and Sha Ra. The sneak peek is an intriguing scene from the film where the lead actors plan to hack the bank account of one of the antagonists in the film. Check out the new video from Vishal's Action below,