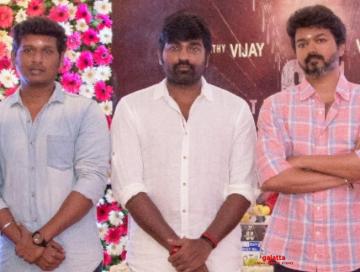 A film that has raised massive curiosity among fans, Vijay’s Thalapathy 64, went on floors last week under director Lokesh Kanagaraj of Maanagaram fame. An exciting venture right from the beginning, the film includes an ensemble cast featuring names like ‘Makkal Selvan’ Vijay Sethupathi, Shanthanu Bhagyaraj, Malavika Mohanan and Malayalam sensation, Antony Varghese, in major supporting roles with music by Anirudh Ravichander under the XB Film Creators banner. With Thalapathy 64 being planned for a summer 2020 release, Lokesh Kanagaraj is at present busy with the finishing touches on his Kaithi announced to hit screens later this month as a Diwali release. Likewise, Aadai fame Ratha Kumar, who is serving as an additional screenwriter on the upcoming Vijay film, has now taken to his Twitter page to praise Lokesh Kanagaraj saying the people know him for the past few months as the director of Thalapathy 64, but do not realize that he has been keeping himself preoccupied with the work on Kaithi while also lauding him for the film's intense and intriguing trailer that was released yesterday. Check out Rathna Kumar’s tweet below:

A joint collaboration of Dream Warrior Pictures and Vivekananda Pictures banners, Karthi's Kaithi has tremendous hype surrounding it after it revealed the film will not include any lead heroine and or songs. Apart from Karthi, the film also includes Anjathe fame Naren, Vijay TV Dheena, Mariam George among others in crucial others along with a strong technical team among whom are composer Sam C. S. for the music, cinematographer Sathya N Sooryan and editor Philomin Raj.