Chiyaan Vikram is arguably one of the finest actors in the current cinematic world. However, he has not been having a great run at the Box Office and is looking forward to a hit to get back to his winning ways. His last outing was the Rajesh M Selva directorial Kadaram Kondan, which was met with a lukewarm response. However, he has already started working on his next movie, which is going by the working title Chiyaan 58. This movie is being directed by Ajay Gnanamuthu of Imaikkaa Nodigal fame and we now have an important update on this movie.

We hear from a source close to the Chiyaan 58 team that the shoot of this movie is currently happening at a location in Thiruvanmiyur, in Chennai. A photo from the shooting spot has also been doing the rounds online. The Mozart of Madras - AR Rahman is scoring the music for this movie, which is being bankrolled by the Seven Screen Studio banner. Srinidhi Shetty of KGF fame has been roped in to play the female lead. Former Indian cricket all-rounder Irfan Pathan is debuting as an actor with this movie and he is reportedly playing a stylish and suave antagonist in this movie.

Chiyaan 58 was announced long back but following Kadaram Kondan, Vikram took some time off his acting to oversee the making of his son Dhruv's debut acting venture Adithya Varma. Apart from Chiyaan 58, Vikram also has Ponniyin Selvan and a couple of other movies in hand. Stay tuned for updates... 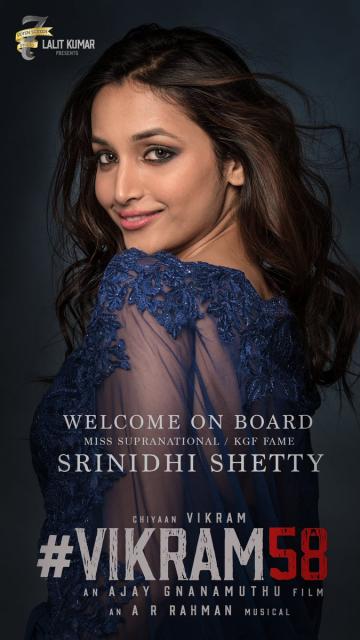