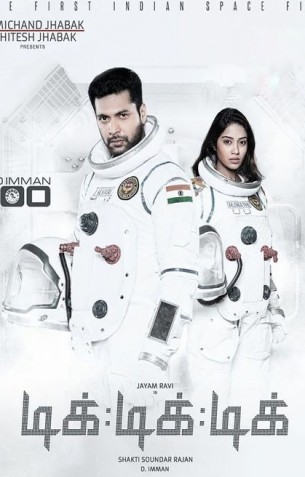 A huge natural disaster is about to happen in Chennai through an asteroid. Space research organization decides to send an escape artist along with trained professionals to Space where they have a way to defend this attack.

Happens to be India’s first ever Space film and so hats-off to this bold attempt of trying a new genre in Tamil cinema. Script is serious and the conflict has a deep detailing, base is strong with all the substantial elements. Patriotic moments enrich the impact.

Direction is flat at places and so the connection is not tight. Screenplay has its own ups and downs, and the major portions are unfortunately weak with plenty of logic loopholes. The movie could have been far more better in terms of execution. Dialogues are mediocre, mainly the English ones are amateurish.

Jayam Ravi’s presence is stiff and his magician kind of character has potential to score in the storyline. His performance is also delightful at many areas. The emotions are effortlessly carried as the real father-son feel is conveyed convincingly. Aarav Ravi, the kid has done well too.

Vincent Asokan is impressive among the big list of supporting artists. Nivetha Pethuraj has also done her job correctly. Roles of Ramesh Thilak and Arjunan are sketched in a cinematic way and their activities are very artificial in some vital situations, especially the scenes with booze lets the value down. Jayaprakash’s character lacks clarity and thus the game becomes boring towards the end.

D.Imman’s music stands as the main pillar here, there are two varied flavour of songs that clicks instantly. Background music is powerful, fits aptly to the ongoing sequence and is silent at few Space portions. Mixing seems to be the key here as the sounds are produced in an authentic manner respective to the situation.

Camera work is tidy but the concerned team could have tried something different as they had the scope for it. Editing is neat and back and forth placements are packaged in a clear way. Art direction is amusing, the whole team has worked really hard to show the spaceship, astronaut costumes and research centre set realistic. The biggest strength of the film is its art splendid detailing in the art work.

Visual effects are satisfactory for the given budget. But somewhere the film fails to give a Space travel feeling. The Chinese villain group fails to create an impact as the whole part up there was boring and presented in a monotonous manner. Also, the second half dips at most of the parts with forced twists and measured heroism at places.

Too many logic loopholes.

Weakly written sequences in second half.

Verdict :A first of its kind attempt in Indian cinemas that could have executed in a much better manner.

Tik Tik Tik is a Tamil movie. are part of the cast of Tik Tik Tik. The movie is directed by Music is by . Production .